Roman numerals are a classification of numerical codes developed by the Romans. Originated in ancient Rome as a set of seven symbols. They were developed for the easy pricing of different goods and services. In this system, letters are used to symbolize specific base numbers and then using their combination to denote other arbitrary numbers.

These numerals are still in use, we use them in everyday life. They are frequently used; in books to count chapters or numbering pages, in annual sporting events like the Olympics and can be seen in fancy watches and clocks.

Once you make yourself familiar with these numerals, it will be easy to read and use this numerical system. You can use our online roman-numeral converter, which is designed to transform the numbers into these numerals and vice versa.

This system utilizes the seven letters as representatives. These letters are always written in capital as I, V, X, L, C, D, and M.

They are organized and combined in a specific pattern to represent numbers. When are written in groups, their values are added, so XI = 11 (as 10+1 = 11). Though, one cannot place more than three of the identical numerals together. In simple words, you can write III to symbolize three, but can't write IIII. Instead, four is specified with IV (here subtract the letter on the left side from the letter of right side, 5-1 = 4).

Nevertheless, this isn’t a pure additive number system. In particular, as a substitute of using four symbols to represent a 4, 40 etc. (i.e., IIII, XXXX), these numbers are indicated by preceding the sign for 5, 50 etc., with a symbol signifying subtraction. Yet, this regulation is usually not followed on the faces of clocks, where IIII is usually found in place of IV.

Moreover, the standard of putting smaller digits before large ones to show subtraction of value was never applied by Romans and came into acceptance in Europe after the development of the printing press.

In this system there is no numeral for zero, it makes advanced mathematics somewhat problematic. It is possible to use addition and subtraction, multiplication and division are impractical.

Let’s consider an example: If we want to add XI and IX, at first, we alter the IX into VIIII. Now, we assemble the numerals in decreasing order. The next step is to convert the IIIII into V which results in XVV, this can be simplified to XX or 20. That’s it! To subtract the numerals we also ignore the subtractive rule. Consider: CCLXXXXVIII - CCLXXXII. In first step we just write it out, the later below the former. Now, we cut out all the alike pairs of numerals. This leaves us a simple step to calculate: XVIII – II subtract to get XVI or 16.

Here is a Roman numeral chart, showing the list of Roman Numerals, to assist you in understanding the symbolism: 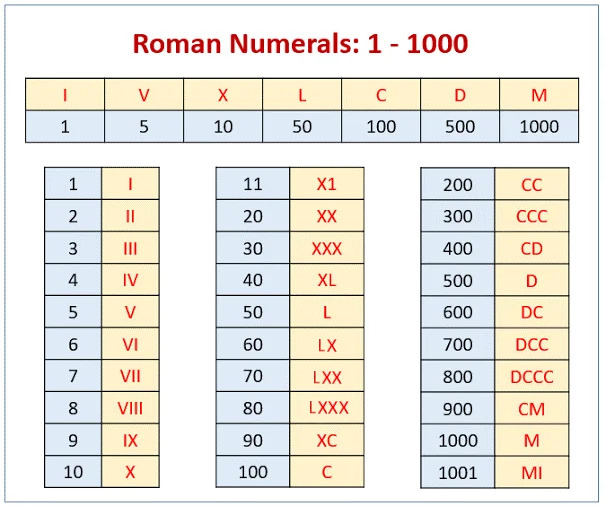 Can’t remember all these? Or want error free quick results? Just visit our place and benefit from our online roman-numeral converter. All you need to do is enter the numeral or digit in the desired conversion box and get the values. We are hopeful that this article will supplement your knowledge regarding the renowned ancient numeral system.

How To Use Roman Numeral Converter?

Ajay
The Roman numeral chart is WRONG. It shows 60 as LI. It should be LX. The 70 and 80 are wrong also. I stopped checking the others. Inaccurate chart.
Pam
very helpful