The probability formula is defined as the number of favorable outcomes divided by the total number of outcomes.

The probability has 3 major types which includes

There are 2 major probability rules which include

If there is job 1 in P ways and job 2 in q ways and both are related, we can do only 1 job at given time in p+q ways.

If there is job 1 in P ways and job 2 in q ways and both are not related, we do both jobs at given time in p*q ways.

Can the Probability be negative?

The probability also helps us understanding how to find expected value by using expected number calculator.

How to find Probability?

Probability is expressed between 0 and 1. 1 is examined as accurate (True) and 0 is taken as incorrect (False). Higher Probability of event assures that this event will occur. 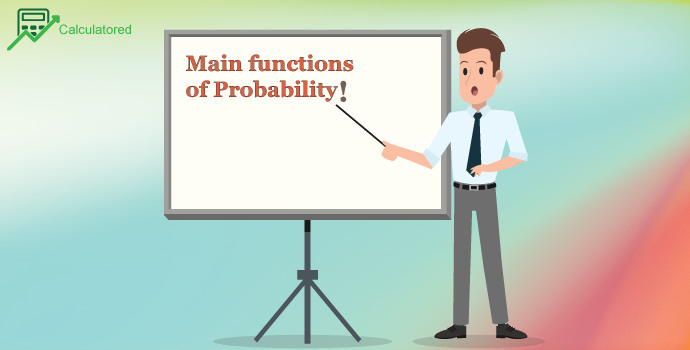 There are different probability functions which we need to know while calculating the probability. These functions are

If set of possibilities are large and only few results are successful, then the probability of the outcome is tiny like P(B)=0.00001. It's always suitable to use the standard deviation formula calculator for reducig your answer deviation from true value.

What is Probability Calculator?

Probability Calculator is a risk analysis tool which is available online. It is designed for finding the probability for single and multiple events.

Probability Calculator helps to examine the relationships of likelihood within two different events and completes the calculations without any error. If you are looking for how to calculate probability? our probability distribution calculator is the best option for you.

Probability Calculator allows to calculate probability of single and multiple events easily. For example, if event A and B has the chances of 50% each, what are possible chances of happenings?

This Calculator provides 6 research goals, plus 7 more when you enter its advance level. This calculator saves a lot of time as long as one knows how to find the probability of separate events.

How to use Probability Calculator?

Probability calculator is free and easy to use. You just need to follow below steps

We hope our probability distribution calculator worked fine for you. Please provide your valuable feedback so that we can improve if it is required.

Studies mathematics sciences, and Technology. Tech geek and a content writer. Wikipedia addict who wants to know everything. Loves traveling, nature, reading. Math and Technology have done their part, and now it's the time for us to get benefits.

Victorina Moreno González
I think your explanation is very good, thank you very much, understood.