The finite sequence will have an upper limit and lower limit (first and last values) and the infinite sequences will infinitely continue in the series. The meaning of Summation (Σ) is just to “add up.” For example, let’s say that you had 4 items in a data set: 1,2,5,7 you can think that these values are placed on the x-axis also called x-values. If you were asked to add up all of the items in summation notation, you would see that the:

When we are using summation notation,X1 means “the first x-value”, X2 means “the second x-value” and so on till the end. For example, let’s say that you had a list of weights: 50kg, 100kg, 150kg and 200kg. The weights and their corresponding x-values are:

Here is the simple form of Summation Σ(x):

The “i=1” at the base of Σ means that it is the start of your first x-value. This would be X1 (50kg as shown in the above example). The “n” at the top of Σ means that the end number of the given values”. In statistics, n is the number of items in the given data set. So, what this summation is asking you to do is “sum up all of your x-values from the first(“i=1”) to the last (n).” For this set of data, that would be:

Note: If you see a number above this sign Σ, instead of n, it means that you have to sum up the values to that certain number. For example, a “3” above the Σ means to add up the third item (X3) in the set but you don’t need to worry about calculation. Calculatored introduce Summation Calculator for calculation of Summation notation.

The Sigma notation is appearing as the symbol S, which is derived from the Greek upper-case letter, S. The sigma symbol (S) indicate us to sum the values of a sequence. A typical value of the sequence which is going to be add up appears to the right of the sigma symbol.

The variable of sigma notation is the variable which is going to add up.

Here is the more explanation of sigma symbol.

To calculate Sigma notation or summation notation we must have these things:

BY using the above equation, we can calculate the summation notation.

After adding up all the values we got summation notation. 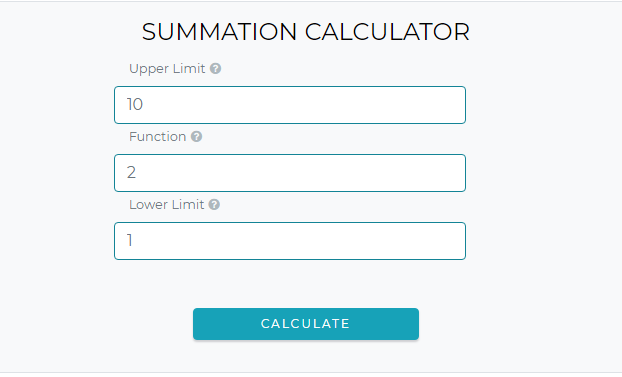 You have to enter three things:

After you entered the values then press “CALCULATE” button and Summation Calculator will calculate the summation of the sequence.

Here is an example to calculate the summation of the function through calculatored’s Summation Calculator.

After entered the corresponding values: