What is Cross Product

How to get the cross product of two vectors

How to use our cross product calculator

A vector is a quantity having both magnitude and direction which makes it a significant tool in Physics. The set of procedures, principles, and properties to deal with this object is termed as vector algebra and much like simple algebra, it includes multiplication.

Yet, vectors are more complicated than numbers since they contain information regarding the quantities, paths and angles. This explains why this algebra type uses two kinds of multiplications; the cross product and dot product. The difference between these two is the fact that the dot product always results in a scalar quantity.

These objects are pervasive in physics, from mass to force, acceleration and even energy all are associated with a vector. And that is why it has a great utility in the physical world. In this article, we will emphasize on the concepts of this product, its formula and calculations using our online cross product calculator.

What is Cross Product?

Definition:  A binary process or a dyadic operation on two vectors residing in a three-dimensional space that is represented by the sign ×. Assume two linearly independent vectors, a and b, their cross product (a × b), is a vector that is at right angles (perpendicular) to both a & b and thus standard to the plane enclosing them.

We will try to explain it in simple words, Firstly, the definition relates a three-dimensional space, similar to the one we live in, since it is the most common application of the vector product, but it can be protracted to more dimensions.

The next thing discussed is that the product obtained will be perpendicular to both vectors along with the plane. Because a 3-d space consist of 3 independent directions. You can consider these 3 directions as being the elevation, extensiveness, and deepness.

Firstly we need to remember that the two objects should not be parallel for reasons that we will be explained later.

Now, let's have a look at the formula:

Here, c- represents the newly generated quantity and a, b- the initial vectors. While, Ɵ- Signifies the angle and n- denotes the unit vector perpendicular to a & b.

The geometrical interpretation of the vector cross product is signified by the factors of perpendicularity and the sinus function previously expressed in the equation. Now, you will get the idea that a and b must not be collinear. For instance, if they were parallel, it would create a zero angle between them. Hence, both sin θ and c would be equivalent to 0, which is a very unfavorable result.

How to get the cross product of two vectors?

The calculation of cross vector may get a little complicated in a 3D space as it involves multiple steps; like finding unit vector and angles etc. A more practical way is to use another formula.

The new formula implies the breakdown of a 3D object into its three constituents. This is an easy and general way to define and work with vectors. In this, each module designates a path in space and the number associated with it embodies the length of the object in the specific trajectory. The three dimensions are denoted by x, y and z and in terms of unitary represented as i, j and k.

According to this nomenclature a vector u can be expressed as:

Using this notation we will find the cross vector, let’s consider two vectors u and v. Having coordinates as follows:

In order to predict the direction of the resultant object of the product, physicists came up with a rule known as the right hand rule. 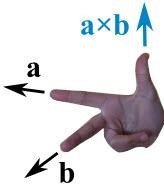 In the above image the two fingers are showing the path of the two vectors and the thumb represents the direction of the resultant vector.

How to use our cross product calculator?

We are done with the basics of calculation, now, we will demonstrate how to use our online smart calculator?

As we discussed earlier, to find the product for any two objects in a 3D space you need three components; x, y and z. If you know all these coordinates of the two vectors, all you need to do is enter these in the given box. After that just press calculate and leave the math work on our vector cross product calculator, it will compute the desired value within seconds.

In the end, we would like to discuss some of the important practical applications of the vector product in the field of physics:

The most common utility of the cross vector product includes exploring the inertia and rotational motion of the objects like torque. Apart from these, it helps us in the field of electromagnetism, where we can study the electric and magnetic fields which are perpendicular to each other. Moreover, the vector product and the dot product has a wide scope in physics.

We are optimistic that our specially designed tool will assist you in all these fields, we also recommend you to have a look at our dot product calculator.

What is Cross Product

How to get the cross product of two vectors

How to use our cross product calculator